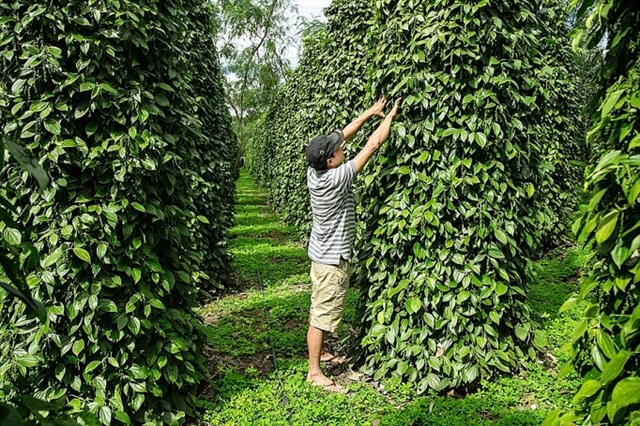 A farmer harvests pepper. The Ministry of Agricultural and Rural Development is working with localities to examine the development of pepper farming with a view to designing a sustainable growth orientation. — Photo congthuong.vn

Nguyễn Nam Hải, chairman of Việt Nam Pepper Association (VPA) told a conference on pepper that wrapped up yesterday in the Central Highlands province of Đăk Nông that the pepper industry this year had seen difficulties due to decreasing selling prices and slow growth compared to last year.

“Việt Nam now has about 100,000ha of pepper with output of 247,000 tonnes. However, pepper prices are still at a low level while production costs have been on the rise of at least 10 per cent from the previous year. This was why the country’s pepper value in the first seven months of the year was slightly reduced by 0.8 per cent to reach $514 million despite the 32 per cent increase of volume,” he said.

The Ministry of Agricultural and Rural Development is working with localities to examine the development of pepper farming to design a sustainable growth plan for the sector.

The growth was driven by good peppercorn prices, which prompted farmers to expand their farms and use growth promoting substances and pesticides to boost yield. When prices dropped, the farming area also shrank to 149,800ha in 2018, and was estimated to hit 140,000ha this year.

As such, a total of 70,000 ha will need to be replanted between 2017 and 2030, mostly in key pepper production hubs in the Central Highlands and the southeastern region.

The ministry said pepper cultivation remained unsustainable due to the rapid expansion of plantations, particularly in areas unsuitable for the plant, during the period of high prices and the lack of effective measures to control diseases.

In addition to cutting the total farming area, farmers have been urged to follow sustainable and good agricultural practices for improved quality and food safety. This could help Vietnamese peppercorns engage deeper in global farm produce distribution chains.

The ministry also asked the sector to build models that link businesses and farmers in production, processing and product origin tracking.

The Import-Export Department under the Ministry of Industry and Trade said nine countries joining in the CPTPP would immediately remove tariffs for pepper products, namely Australia, New Zealand, Canada, Malaysia, Singapore, Brunei, Chile, Peru and Japan. This was set to give Vietnamese pepper a competitive edge in CPTPP countries.

In the EVFTA, EU countries committed to removing tariffs for pepper products once the agreement takes effect, another boon for exporters.

To fully tap the potential, the pepper industry was asked to not increase plantation areas and restructure toward sustainable development. It should also apply clean agriculture standards including VietGAP and GlobalGAP as well as improve quality and food safety.