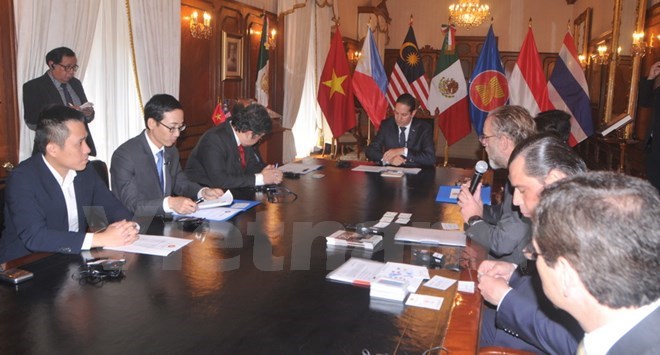 At the event (Source: VNA)
Mexico City (VNA) – The ASEAN Committee in
Mexico City (ACMC) recently paid a working trip to the central state of Queretaro
to learn about business opportunities between the two sides.

At a working session with Governor of Queretaro state
Francisco Dominguez Servien, Malaysian Ambassador Mohammad Azhar Mazlan, on
behalf of the committee, expressed his wish to bolster ties between ASEAN and
Mexico, and between ASEAN and Queretaro in particular in diverse areas,
especially in trade and investment.

Diplomat Doan Anh Tuan from the Vietnamese embassy in Mexico
highlighted huge potential of cooperation between Queretaro and Vietnamese
localities, especially in fields of Queretaro’s strength such as aviation,
technology, education and agriculture.

He wished that the host authorities would create favourable
conditions for Vietnamese farm produce, particularly rice and coffee.

Servien, for his part, pledged all possible support to ASEAN
enterprises and expressed readiness to cooperate with ASEAN’s localities in
investment, trade, agriculture, scientific research and training of technicians
and aviation engineers.

During their stay, the ACMC delegation held a working
session with Board of Directors of the Centre for Engineering and Industrial
Development under the National Council of Science and Technology and visited
Queretaro Aeronautics University.

Statistics showed that two-way trade between ASEAN and
Mexico soared 115 percent over the past decade and hit 20.2 billion USD in
2015.-VNA