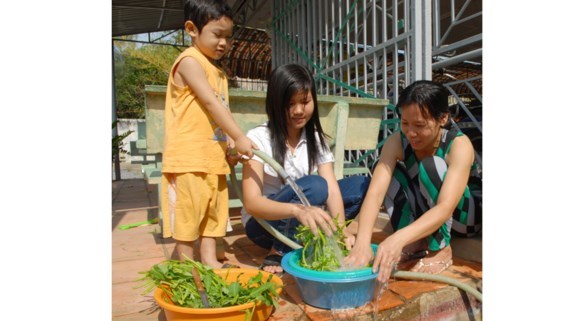 Residents in Can Gio District use tap water

The program targets to provide fresh water to most households in HCMC. HFIC always volunteers to call for social contributions for infrastructure development especially in urban areas.

From 2010 to now, HFIC has financed 160 projects in the city with total spending of VND25,800 billion including infrastructure, education, medicine and water supply.

For years, People’s Committee, related agencies and Sawaco have made concerted efforts to develop the city’s water supply system striving to provide fresh water to all households in the city.

Since 2015, HFIC and Sawaco have together built 33 water reservoirs and pipes in districts with total investment of VND3,300 billion of which HFIC contributed VND2,440 billion.

Some projects were carried out by Sawaco and HFIC such as the ring road No.2, Huynh Tan Phat, Nguyen Dinh Chieu, water reservoirs of Tan Hiep Company and of Thu Duc Company.

HFIC managers said that the company was calling for contribution of all sectors and economic elements for infrastructure projects especially on public investment projects approved by the municipal People’s Council and the city’s seven breakthrough programs.